The castle was built in 1892 as the home of Charles Eisenbeis and his wife Kate. Mr. Eisenbeis was a prominent member of the Port Townsend business community. He had various business endeavours which included a bank, hotel, brewery, bakery, lumber works and brick works. Eisenbeis was elected as the town’s first mayor. Manresa Castle was the largest residence in Port Townsend during that time. It had 30 rooms and was called the Eisenbeis Castle. German artisans installed finely crafted woodwork and tiled fireplaces. When Charles died in 1902, Kate remarried and the house was left abandoned.
In 1925 an attorney bought the property and made it a vacation house for nuns who are teaching students in Seattle. However, this did not work out quite well and the castle became a training college for Jesuits. In 1968, the castle was converted into a hotel and was renamed the Manresa Castle.
There are reports that hotel’s rooms 302, 304 and 306 are frequented by two resident ghosts. There is reportedly a monk who hung himself in the castle’s attic. To this day, people can still hear the footsteps of the monk in the attic. The other ghost is that of a young lady who had been waiting for her beloved to return from war. When she heard the news that her beloved died in war, she threw herself out of the window and fell to her death.
In the café, which was once the chapel, drinking would spontaneously explode even when they are on the hands of servers. Empty glasses would also turn upside down on their own.

The Manresa Castle does not have special tours or haunted event packages. If you are interested in learning more about the haunted guests or ghosts that reside at the hotel please call or visit their website to make a reservation. What better way to get in touch with them than to spend a few nights in the same room... 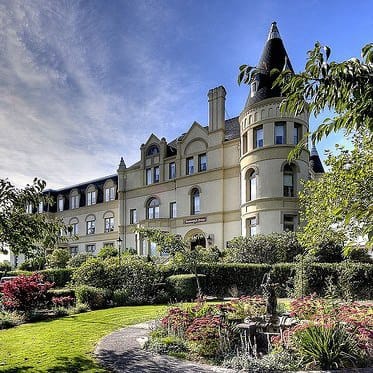