Why take a tour when you can stay the night and your very own haunted hotel. Are you brave enough to try? Here are what one guest who recently stayed at the Ann Starrett Mansion said.
"My boyfriend and I stayed at the Ann Starrett Mansion last December for New Years. I have never been so scared in my life. We stayed in the Master's Suite on the second floor of the mansion. The first night that we stayed there we went to bed around midnight. I had an uneasy felling about the place so I left the lamp on the bedside table on all night. At 3:15 I woke up completely drenched in sweat. There was no heat on in the room and my boyfriend was a normal temperature. I am not prone to sweating a lot so this was very odd to me. I could not fall back asleep until about 7am. The next evening, New Year's Eve, I had the brilliant plan to drink more champagne than normal so I would go right to sleep and not wake up in the middle of the night. We went to bed arould 1am and again, at 3:15 I awoke drenched in sweat. I was up for about 2 hours listening to the wind and noises in the house when suddenly the armoire across the room from the bed began to shake and rattle violently. I screamed and my boyfriend woke up just in time to witness the armoire door opening on its own. The armoire door had a handle and was not the type of door that could just swing open. It had to be "opened". Needless to say I had another sleepless night. It is a beautiful mansion but I would never stay there again." - When you arrive in Port Townsend, take the following route:
From the Port Townsend ferry dock:
1. Take a RIGHT on Water Street.
2. Take a LEFT on Monroe Street.
3. Take a LEFT on Clay Street. Go up three blocks.
4. Ann Starrett Mansion will be on your right on the corner of Clay and Adams.
From the Hwy 20/Sims Way:
1. Take a LEFT on Kearny Street.
2. Take a RIGHT on Lawrence Street.
3. Take a RIGHT on Adams Street.
4. Ann Starrett Mansion will be on your left on the corner of Clay and Adams. 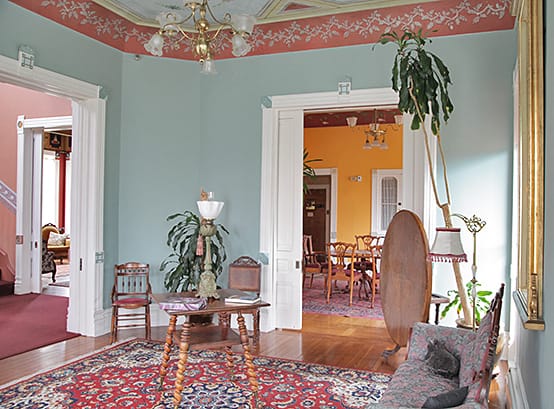