The museum store is open seven days a week from 10:00 a.m. to 5:00 p.m in July and August, and 11:00 a.m. to 4:30 p.m. September through December and February through June. It is closed Thanksgiving and Christmas Day. In January, the store and Mansion are closed for annual maintenance.
For more information, call the Pittock Mansion museum store at (503) 823-3628 or Pittock Mansion information line at (503) 823-3623. - The Pittock Mansion Museum is located on a 46 acre estate, up on a mountain of sorts, 1000 ft above Portland, Oregon.
The best travel trips include some fun, some learning and plenty of marvelous sightseeing. The Pittock Mansion provides visitors from around the world a chance to experience the splendor and appeal of our amazing City of Portland through one of a few publicly accessible historic homes.
The mansion is a perfect destination to instill a sweeping impression of all that makes Portland memorable: beauty, progress, citizen involvement, preservation.
Reflect upon what life must have been like as Portland evolved from a small lumber town into a bustling, vibrant city.
Picnic in gardens surrounded by gorgeous city views.
Capture your journey with beautiful photos to fill a scrapbook while visiting one of the region’s most breathtaking scenic backdrops.
Your Oregon Trail travels will be enhanced by learning about the hard-earned success of Henry and Georgiana Pittock, two young pioneers with a dream, and their Northwest legacy. 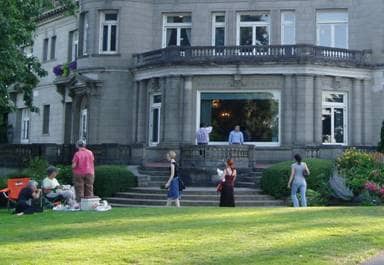