The Blue Hole is approximately 130 across, almost perfectly round, and has steep banks. Its waters remain curiously cold, even in the hottest summer months, averaging about 58 degrees. Unlike most bodies of water in the Pine Barrens, which bear a coloration similar to tea due to the high content of iron, tannic acid, and suspended sediment, the water of the Blue Hole is perfectly clear.
There are several theories as to how the Blue Hole came to be. Some say that it is the result of a meteorite striking the Earth. Others claim that it is what geologists call a pingo. A pingo is a small body of water which is the result of an ice mass which forms beneath permanently frozen soil during an ice age. The ice mass expands for thousands of years then breaks through the permafrost to create a depression rimmed by a hill. When the climate warms, the ice melts, forming a pool.
But what about the fabled whirlpools, or what the locals refer to as “whirlypools,” which are said to drag down unsuspecting swimmers to their watery graves? How could such a current exist in such a seemingly placid body of water? One explanation for this might be that the Blue Hole is fed by ground water, not the nearby stream. This fact accounts for why the water does not contain the same murky color as the river, and might also be the reason for the mysterious surges of current.
Scientific rational does little to lessen the mysteries of this curious body of water though, which seem to run as deep as the Blue Hole itself.
The Blue Hole is a nearly perfect circle of water, deep in the Pine Barrens of Winslow, NJ. The water is strangely clear blue, unlike the murky waters of it’s surrounding counterparts. It is said that fish do not swim in the water and that there are no signs of life inside of what many call “The Devil’s Puddle”. The water also seems to maintain an unusually low temperature, even in the warmest months. When standing near the Blue Hole, it is said to be eerily quiet, with no signs of life at all. Not in the water, or around it.
blue-hole-devils-puddleFor many years, parents have kept their children away from the small body of water. Many believe that the Blue hole is a bottomless pit. Some people even claim that the Devil himself uses the water hole, as his personal portal to Hell. Some also claim that the hole is home to another kind of devil.
This Pine Barrens area is closely associated with the infamous Jersey Devil, and many say that the Blue Hole is home to the mysterious creature. The Jersey devil has been terrorizing people for over 200 years in the Pine Barren area, although evidence for its existence is scarce. Some locals have claimed to see the creature crawling out of the hole, on occasion.
The fear of locals is not unfounded. It seems that many who chose to swim in the small body of water, never made it back out. Many bodies have been pulled out of the unusually still water, with scratches on their backs and lower legs. This makes sense, when you hear other reports from swimmers who claim to have felt cold hands clawing at their legs, pulling them down.
Unexplained whirlpools have been witnessed inside of the circular body of water, which defy explanation. One one occasion, a man was pulled from the water, with scratches on his legs and black empty holes where his eyes once were. Some have attributed this to some type of ritual or occult activity. others say that it’s just the Devil’s handy work. No matter which legend you choose to believe, it seems as though some type of paranormal activity may be happening at this remote body of water.

Legends of the Blue Hole - The Devil’s Puddle PHOTOS

You are welcome to find out yourself, if you are ever in the Pine Barrens area. Just follow the paths through the forest and you will soon find yourself at one of the most mysterious places on earth. However, I wouldn't recommend going for a swim. The water is always cold. And there may be even colder hands, waiting beneath the surface. 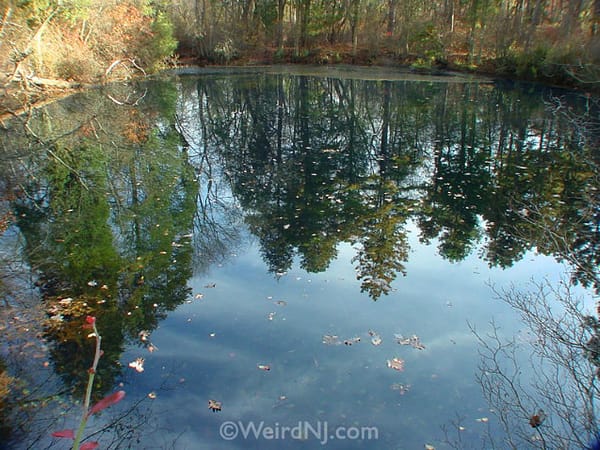