The building found at the corner of West Forth Street and Market Street in Maysville, Kentucky was donated by Mrs. Mary Wilson in 1908. It had previously been the Hayswood Seminary, a private school for girls, and was built sometime in the 1800s. As the seminary closed the building was called the Wilson Hospital, but on her death, (or by another account changed in 1908 after she moved) was re-named after the old Seminary, and became the Hayswood Hospital.
The building was replaced in 1925, designed by Samuel Hannaford. Then additions were in made in 1971. Some sources say the original structure was incorporated into the current one while others report that it was demolished or set on fire. Many babies have been born there over the years, and the hospital earned care awards presented by national accreditation groups. After Pearl Harbor, the U.S. Navy used part of the hospital for the rehabilitation of mentally harmed survivors of that attack. The changing
world of modern healthcare caught up with many small city hospitals, and Hayswood was no exception. For reasons of mere survival, it lost its non-profit status in 1981, as it was sold to Nashville-based Hospital Corporation of America (HCA).
Hayswood closed its doors in 1983 with the opening of Meadowview Regional Medical Center. Meanwhile down the hill in Maysville, the former Hayswood Hospital building was purchased by Covington developer Esther Johnson in 1994. She had plans to convert it to apartments. Previously senior housing organizations had considered it for a nursing home and/or retirement apartments. As of 2004, nothing has happened as the former hospital sits silently vacant, collecting dust, overgrown, and rotting on the outside, awaiting a new Mary Wilson to arrive.
Neighbors report strange lights in the windows as well as noises, including the cries of an infant. There are also some reports, both day and night, of a figure standing in the last third-floor window. Second-hand accounts tell of a stretcher in one hallway that seems to move of its own accord, while others report shadowy figures resembling doctors and patients lurking about the hallways. Those who drive by feel as if they’re being watched by someone within.
So is Hayswood Hospital Haunted? Hospitals are often hot spots for ghosts and paranormal activity, with many ghost hunters and enthusiasts managing to capture very convincing evidence at locations such as these. Many people believe that the amount of suffering and death that occurs within the walls of places like hospitals and prisons are to blame for the ghosts and paranormal
experiences reported. Are ghosts roaming the halls of this hospital? We may never be sure, but many people who have managed to visit this scary abandoned location say yes.

The building is abandoned so you may enter at your own risk. With all the reports and articles there does not seem to be any guards or signs saying keep off, but I again you are entering at your OWN RISK!! - The Hayswood Hospital building can be found in Maysville, Kentucky, located on Market Street, near the intersection of Market Street and 4th. Market Street runs along the hill just above the town of Maysville, a strategic spot to see a glorious view of the Ohio River, the downtown section of Maysville, and the Simon Kenton Bridge, which connects Kentucky to the Cincinnati area of Ohio. 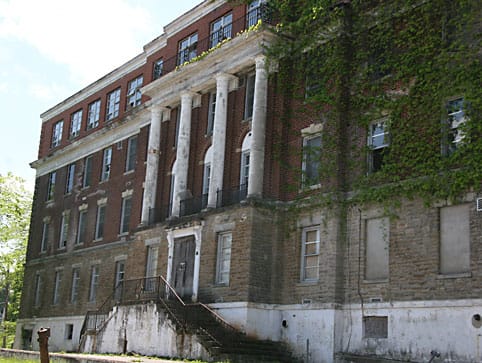