West Virginia Penitentiary, 818 Jefferson Avenue, Moundsville, West Virginia 26041
Location: In the town of Moundsville, West Virginia Penitentiary can be found on the corner of Jefferson and 8th Street. From I-70, take Route 2 South to Moundsville, turn left on Eighth Street, and the Penitentiary is two blocks ahead.
MANIFESTATIONS:
Prisons are often the places of unhappy, angry people and death by the hands of authorities or by other prisoners happened. Thus, prisons are a great place to find ghosts of people who have had traumatic experiences or have even died there, and can't quite leave just yet.
(Alcatraz * Fort Delaware)
1) Maintenance Man who lived in the basement - Is often seen by the living wandering around the bathroom area of this basement.
Most often seen ghost. The maintenance man made it his hobby to report the wrong doings of inmates to the guards, which must have made him feel important and superior. The inmates got together and shivved him with homemade knives, while he was sitting on the toilet.
2) Arvil Paul Adkins - Is thought to haunt the gallows area.
One of many botched hangings: He was up on the scaffold, but the trap door opened prematurely and he fell down through the hole, landing on his head, becoming badly injured. The guards took him back up on the scaffold and hung him correctly this time.
3) Inmate Roberts haunts his cell block and the room where he met his death. It was reported that his body was buried behind a wall.
Cincinnati Enquirer, Nov. 30, 1886 - Reported that that many deaths were caused by the wardens, who had been known to torture misbehaving inmates with ice cold water in the face while being held in stocks. The really bad inmates were given with near death beatings, tied to a Kicking Jenny. Inmate's feet were clamped to the floor, while their bodies were bent over a kicking Jenny, with their hands tied above their heads on blocks. How lovely!!!
4) The winter recreation room in the basement, called the Sugar Shack, has been the hotbed of paranormal activity. Though no one was killed here, a lot of violence, probably inmate rape/sex and other injuries happened here because they were very loosely supervised by guards.
STILL HAUNTED?
Yes Indeed!

Daily Tours
10am-4pm 7 Days a Week
Tours begin every hour on the hour
*Closed HOLIDAYS* Learn more
Group Tours at the former WV Penitentiary are 90-minutes of history, education, fun and interaction with your tour guide about cold, hard facts. For instance, some inmates spent 22 out of 24 hours in their cells. Old Sparky was built by an inmate, and much more ... This is an experience like no other! The gothic-style structure is listed on the National Register of Historic Places and was also listed as on one of the top 500 places to visit in "USA Today." Also in 2005, the former WV Penitentiary was listed with "Travelocity" as one of the LOCAL SECRETS, BIG FINDS from more than 30,000 entries as a top insider spot in the United States.
SCHOOL BUS TOURS
School groups, senior organizations, clubs, or unique family reunion activities, will walk down the long, eerie hallway and see (maybe even enter) a 5x7 cell that was once occupied by an inmate. You also will view an array of artwork done by inmates. After your 90-minute guided tour, please take time to enjoy our museum. The museum houses a variety of contraband on display, a copy of the letter from Charles Manson requesting transfer to the former WV Penitentiary, pictures of executed inmates, and last but definitely not least, "OLD SPARKY." The electric chair that was made by an inmate to execute inmates. It will be an experience that you will talk about all the way home!
*Group Tours consists of at least TWENTY (20) people and a reservation MUST be made at least a week in advance by calling 304.845.6200 or email tours@wvpentours.com. - West Virginia Penitentiary, 818 Jefferson Avenue, Moundsville, West Virginia 26041
Location: In the town of Moundsville, West Virginia Penitentiary can be found on the corner of Jefferson and 8th Street. From I-70, take Route 2 South to Moundsville, turn left on Eighth Street, and the Penitentiary is two blocks ahead. 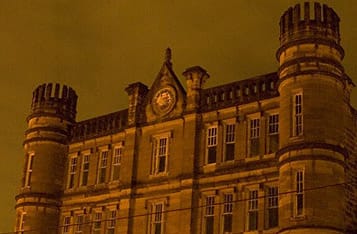