The Blennerhassett Hotel is said to be haunted.
Blennerhassett ghost stories
The Blennerhassett, like any old building, has a few ghost stories.
I’m not sure why. Possibly it is only natural a building more than a century old has picked up a few ghosts.
Chief among these wandering spirits is an older gentleman in an old-fashioned, three-piece grey suit. Staff who have seen him describe him as having slicked back hair and a beard; sometimes he has a top hat and cane as well. He appears quite solid, though he has a bad habit of vanishing in the blink of an eye.
He’s believed to be the ghost of William Chancellor, the man who built the hotel. He’s rather a mellow sort of spirit, much more inclined to be smoking a quiet cigar somewhere than disturbing guests. Often, in the library and on the second floor, cigar smoke is all that is seen of him.
Also on the second floor, ghostly children are said to play tag in the halls. One bellman admitted to having seen, out of the corner of his eye, what looked like a little girl in a fancy dress disappear around a corner. Another admits to hearing a whistling noise on more than one occasion, as though someone were trying to get his attention. But when he checked, no one was there.
Another child, this one described as a “turn-of-the-century newspaper boy,” haunts the kitchen, tugging at the sleeves of the cooks, or hanging around on the lower level in front of the elevators. Perhaps he’s a member of the group on the second floor who just wanders off occasionally, or perhaps he just prefers to pester the living.
Speaking of pesky spirits, a particularly mischievous one, called “The 4 O’clock Knocker,” is said to knock on the door that leads to the coffee bar at the unreasonable hour of 4 a.m. Don’t try to set your watch by this ghost, though. Months will go by where nothing is heard or the ghost will knock at other, stranger hours— like, say, 2:15 in the afternoon.
If knocking, cigar smoke, and children aren’t enough, there’s a party in the Charleston Ballroom that has no interest in ending. One staff member, working late, once heard music and laughter from the Charleston, but when they reached the ballroom, it was empty and quiet. But at least one member of this long-ago fête is said to still be hanging about— a man in a white tuxedo occasionally appears in the hotel’s mirrors, several of which hang in the hallway that passes by the Charleston.
One more note: a great deal of stories report our elevators as haunted as well. Though we’ll admit that they do stop at random floors and open their doors without provocation, this is because they’re old, slow, and easily confused. People tend to give up on waiting for them and take the stairs.
Then again, perhaps one of our resident haunts, who have all the time in the world to wait for an elevator, is using them instead.

The Blennerhassett Hotel does not have special tours or haunted event packages. If you are interested in learning more about the haunted guests or ghosts that reside at the hotel please call or visit their website to make a reservation. What better way to get in touch with them than to spend a few nights in the same room... - From I-77 North and South, take Exit 176, Junction US Route 50.
Head West on US Route 50 and take the “Downtown Parkersburg, Division Street” exit.
Turn right at the light and follow to Market Street. Turn left onto Market Street.
The hotel is on the left on the corner of Fourth and Market Streets.
Complimentary Valet parking is available. 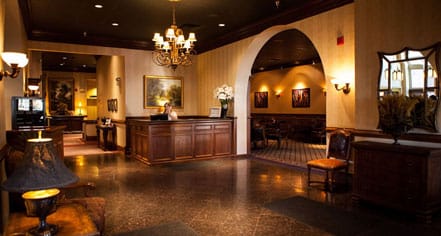