Josephine Pile Roman loved the social life of New Orleans and missed it when she moved to Oak Alley Plantation. As the years went by, she visited more and more in New Orleans with their children in tow, leaving Jacques by himself more and more often. Jacques died of TB in 1848 alone without his family.
Louise Roman, daughter of Jacques and Josephine, was raised in the French Creole upper-class culture. She became highly insulted and really angry when a suitor who had too much to drink and dared to try to kiss her in his condition. She lost her temper and ran away from him. In this angry state, she tripped and fell, cutting her leg badly by her iron frame in her hoop skirt. She developed gangrene from the gash, and lost her leg. Louise felt she was now damaged goods, not fit to marry in her class. She was mentally scarred and left the plantation and joined a convent in St. Louis MO, devoting her life to serving the Lord. She later moved back to her home at Oak Alley in her later years.
Andrew and Josephine Stewart truly loved Oak Alley Plantation and spent a lot of money to restore their beloved home. Josephine wanted to be sure that Oak Alley Plantation would be well cared for, so she left her money and deeded 25 acres of the property to the foundation.
MANIFESTATIONS:
A candlestick once flew across the room right in the middle of a group of visitors on a tour led by a hostess.
Staff have heard the sound of crying coming from somewhere within the 'Big House.'
A maintenance man was working alone in the mansion on a project. He felt a presence keeping him company, that touched him as if to encourage his efforts.
The entity of a slender, young woman with long dark hair - (Thought to be either Josephine Pile Roman or their daughter Louise.)
This entity has been seen throughout the mansion. She has been seen walking up on the widow's walkway, and hanging out in various rooms. In the master bedroom, a tourist inadvertently caught her image on a picture, much to his surprise! She also rides her horse around the estate grounds.
Jacques Telesphore Roman III
The entity of a man wearing grey clothing and riding boots was seen near the back of the mansion, near the old kitchen by a tour guide.
His face was seen in a mirror in the attic.
The benign entity of Josephine Stewart - (Seems she can't quite leave her beloved home)
After a private event, the personnel closed the 'Big House' for the evening. Imagine their surprise when they noticed the lamp in the lavender room was on, illuminating the room. They then saw a shadowy figure of a woman glide across the room and stopped to look at them from her room lookout.
The apparition of Josephine Stewart has been seen sitting on a bed in her favorite lavender room.
PSYCHIC RESEARCH:
Louisiana Spirits Investigations - Made two visits to Oak Alley with some interesting results. The paranormal activity happened in the attic on both trips.
1st Visit: Shadows were seen on the wall, mists were captured on film, short glimpses of Jacques Telesphore Ramon's face were seen in the mirror. Some entity grabbed the arm of one investigator hard, shooting an electrical charge through his arm, causing him to drop his camera.
EVPs were recorded.
second visit - Again the activity centered in the attic. Bill Murphy, a California film maker came along to record. They recorded some great EVPs. Also in cottage 4, where some of the crew slept, they got an early morning wake up call by a loud bang in the bathroom.
STILL HAUNTED?
A big yes is in order. People who truly loved Oak Alley Plantation are still enjoying the ambiance of the place, willing to share their home with the living.
I think that the long haired female entity is Louise, who must have felt cheated out of living the full life offered to her station and status because of her lost leg. I don't think it is Josephine Pile, who never liked living at Oak Alley, preferrring the city life.
Jacques Telesphore Roman III loved Oak Alley Plantation and is still hanging around, hoping that his wife Josephine will at last return, while checking up on the living. I think it was the entity of Jacques who let the Louisiana Spirits investigation photographer know his personal disllike for him by squeezing his arm (Incident is described above.) Jacques probably would've preferred to throw him out the front door if he could!
Josephine Stewart dedicated her passion and funds for the preservation of her beloved home, and can't quite let go, perhaps making sure her wishes are followed.
Other unknown entities may also be hanging around. The EVPs suggest that other trauma happened at the Oak Alley Plantation, leaving unhappy entities with their issues. 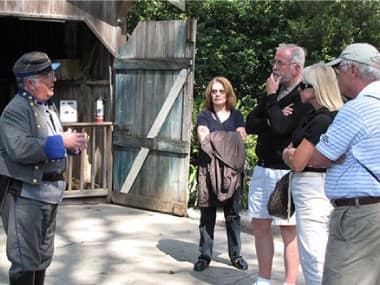