It seems the Myrtles Plantation of Louisiana has many different
spirits that roam its beautiful landscaped areas outside and inside the manor itself. The most famous ghost would have to be Chloe, she was a governess for Judge Clark Woodruffe's children. The Judge also carried on a affair with the mulatto woman. He soon tired of her and banished her from connection with the family. He then caught her eavesdropping on a conversation of his. In anger he decided to make an example of Chloe and have her ear cut off. After that she wore a green turban to hide her deformity. She extracted her revenge however, she asked to bake a birthday cake for one of the Judges children, a peace offering in a way and was granted permission. While mixing up the cake she added a few choice ingredients to the batter that wasn't in the recipe. She poisoned two of the judges children and his wife to death. She was hanged for her wickedness, her corpse was then thrown in a nearby river. The ghost of Chloe has been seen several times roaming around the mansion in the middle of the night. Sometimes a baby's cry is heard when she is seen. She also likes to disturb the sleep of the guests by lifting the mosquito netting that surrounds the beds. Some say she is still checking on the Judges children she used to govern.
Another spirit that makes himself known is William Winter who owned the Plantation between 1860-1871, his spirit is said to linger because of the strange circumstances surrounding his death. He was called out on to the porch one night where he was shot in the chest, he then staggered back into the house and managed to climb 17 of the 20 stairs where he died in his wife's arms. He is now heard climbing the stairs but he only makes it to the 17th one. Other sketchy sightings at the Myrtles Plantation have included a pool of blood, apparitions of two little blonde girls peering through the windows, a mischievous child entity who likes jumping on freshly made beds, he is followed closely by a young woman in a maids uniform who smooths the rumpled bed linens. A confederate soldier marches across the porch, a man in khaki waits at the gate to warn customers away, no-one living is posted there. A VooDoo preistress spirit is seen from time to time chanting over the still form of a young girl. Legend has it she was unable to use her powers to save the girl from a fatal disease.
All these spirits and more are seen, felt, and heard at the Myrtles
Plantation. It really is a house of spirits...

HISTORIC TOURS DAILY: 9 AM TO 5:00 PM, EVERY HOUR AND HALF HOUR; $10 PER PERSON, $7 CHILDREN 12 & UNDER
MYSTERY TOURS: FRIDAY & SATURDAY EVENINGS AT 6, 7 & 8 PM; $12 PER PERSON, RESERVATIONS STRONGLY RECOMMENDED
for information and reservations, please call us:
800-809-0565
or
email us at chloe@myrtlesplantation.com
Overnight guests under the age of 21 must be accompanied by a responsible person over the age of 21. Thank You for your cooperation. 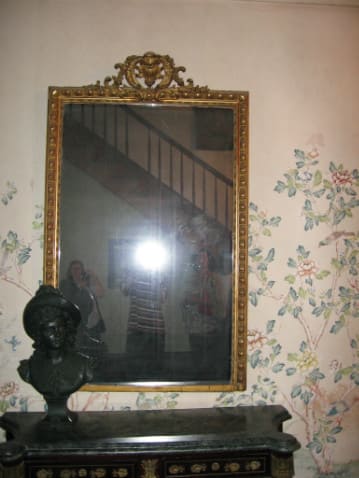