The hotel’s history began in July of 1923 when people in Salem clamoured for a modern hotel. More than a thousand residents of Salem and businessmen bought stocks in the hotel and they owned the hotel until after World War II when a group of local businessmen acquired controlling interest. The hotel opened for business on the 23rd of July 1925 amidst fanfare. Thousands of people turned up for the parade.
The hotel was named after Salem’s most famous son, the author of The House of Seven Gables and The Scarlet Letter, Nathaniel Hawthorne. The hotel hosted its first wedding reception in October 1925 and the newlyweds were William Russell Burns and Lucretia Johnson Perkins. Today, there is a time-honored tradition in wherein 100 couples hold their wedding receptions in the hotel.
Salem is a place which is notorious for the Salem Witch Trials which happened in 1692. Salem is prone to stories of haunting and restless spirits due to the fact that it has a very violent history. The colonial city has more than its share of witchcraft and paranormal activity that go as far back as the infamous witch trials. One of the first women to be executed during the witch trials was Bridget Bishop. She was the owner of an apple orchard where the hotel is now located. Guests at the hotel report smelling apples even though they’re not included in the menu.
Most of the buildings surrounding the hotel were constructed by the Salem Sea captains. They were a lively group who assisted people in old age, as well as people with disabilities. However, the Salem Marine Society was razed to give the hotel more space. Other paranormal activities in the hotel have been attributed to the sea captains who were returning to their gathering place.
Room 612 is reportedly one of the most haunted locations in the hotel. The apparition of a woman has been seen to wonder the halls outside the room, often pausing in front of the door. In the room itself guests have often complained about an uneasy feeling as if someone was sharing the room with them.
In room 325, there have been several reports of lights and faucets turning on and off of their own accord. There’s also been reports of a baby crying in distress, and feeling of being touched.
Several hotel guests have reported hearing strange sounds and having strange occurrences. A houseman who used to work in the lower deck returned only to find his entire setup changed and since then has refused to work during night-time. The hotel also has a large wheel in the hotel restaurant which turns around, as if controlled by the hands of a long dead seafarer.

HALLOWEEN AT THE HAWTHORNE HOTEL
THE 2014 THEME -- MARDI GRAS MASQUERADE on October 25
Think beads!
Think over-the-top!
Think fantastic costumes!
And stay tuned for more information and more great surprises!
2014 Halloween Party Package and Halloween Night Package are SOLD OUT
~ Please call the Hotel at 978-744-4080 to be put on the Waiting Lists
2013 Poster designed by Rooms Division Manager Megan Campbell--
Come to the 2013 Hawthorne Hotel Halloween Party!
Nightmare on Hawthorne Boulevard! See you there! 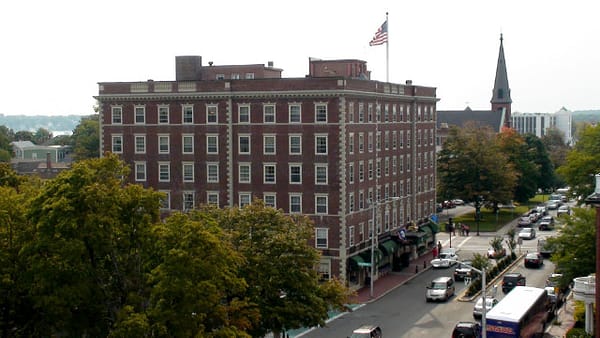 The Curse Of Giles Corey