DESCRIPTION/HISTORY:
Built by Levi Valentine, in 1879, this sturdy, 4 floored; (basement & 3 floors), barn-like structure was built to last the ages, becoming a multi-purpose commercial and community center, as well as a safe haven against Indian attacks, in the early days, before the treaty was signed. Valentown Hall Museum's "banked" basement area was originally used as a stable for horses.
The ground floor was used by a variety of merchants; general mercantile store, bakery, harness-maker's stall, meat shop, cobblers shop and farming supplies. Also, a community room with a piano could be found on the first floor. Today, the first floor exhibits reflect what it must have historically looked like, an authentic vision from the past. Tom and I found it fascinating when we took the most thorough tour of the building, from a very dedicated, enthusiastic docent.
The second floor, where the Grange Hall was located, was used for schooling, and community meetings. Classes in cooking, housekeeping, sewing and other skills needed in running a home were offered to girls and women. Business, science, wood-working and farming classes were offered to men/boys. Both men and women enjoyed the theatre, music and art classes. The second floor also has exhibits that showcase various events in history; flags, treaties, etc, medical technology, and more details of living that were most interesting.
The top floor was the dance hall, big event area that covered a variety of social functions; such as church services, oyster dinners, dances, theatrical plays and "performances by the 54-piece Victor Military Band conducted by William A. Williams." This floor has an 18 foot ceiling and a lovely chandelier.
In 1940, the building was in poor condition, and was nearly torn down. Long time resident of Victor, Sheldon Fischer, a man of many talents and gifts; one of them being a collector of historical items and documents, bought the building J.I.T., and turned it eventually into a museum, to house all of his treasured artifacts of the people who lived in the Genesee Country. For over 50 years, Sheldon, his wife, Lillian, and their children have dedicated their time and money in raising funds to restore the building and provide a huge window to see what life was like in Genesee Country.
HISTORY OF MANIFESTATIONS:
The combination of jealousy and anger often leads to murder.
( County Line BBQ Restaurant * O'Henry's Roadhouse Building * Birdcage Theater * White Eagle Pub and Tavern * Langston Western Store )
* During a dance on the fourth floor of Valentown Hall, a jealous suitor of a young woman, killed the woman's dancing partner.
People who love a building during their lifetime, sometimes choose to stay there for their after-life , or at least like to visit it a lot.
( Brumder Mansion * Loudon House * Brewery Arts Center * Kelton House Museum * Collingwood Art Center * Maumee Bay Brewing Company )
* Valentown Hall was the home to many businesses, the location of many events of all kinds, school of learning, a place of refuge during Indian attacks, and a place to buy needed supplies throughout the years.
Cherished items left behind by the deceased owners, sometimes are hard to let go of, and leave forever. Spirits sometimes hang around these items, still enjoying them the best that they can.
( Nevada Governor's Mansion * Gettysburg Cemetery Lodge * The United States Air Force Museum * MacArthur Military Museum * Speed Art Museum )
* The Valentown Museum has many artifacts and items on display, telling the The story of life in the early days of the area.
MANIFESTATIONS:
In the basement, the tools move by themselves. EVPs have been captured in this area.
In the Bakery area, staff and visitors have seen shadows, and have seen a dark shadow leave the bakery and go up the stairs.
A paranormal investigation group has posted on YouTube a video of a see-through apparition of either a shopper or merchant moving around behind the investigator.
A boy scout troop that was spending the night on one of the upper floors, heard the sound of an old fashioned music box.
PARANORMAL INVESTIGATION FINDINGS
The Ghost Hunters TAPS TV show investigation also heard the music box, and Grant saw a shadow. Paranormal Investigations With Integrity captured some good EVPs and got some noises in response to their requests. The basement was an interesting place to experience.
STILL HAUNTED?
A big YES INDEED is in order. Personal experiences are backed up with captured hard evidence, from EVPs, to video coverage. Paranormal investigator, Rich Newman comments in his book, Ghost Hunter's Guide, that Valentown Hall Museum is the perfect place for beginning paranormal investigators, as the museum offers year round ghost hunts at a very reasonable price. Paranormal groups have captured interesting evidence, pointing to the existence of the spirits staying there.

Open: Saturdays 12-4 through Sept. 29, 2011 or by appointment
Admission: $5 adults - $3 seniors & students - children under 5 free
info@valentown.org - Valentown Hall Museum can be found off of Highway 96, on the corner of High Street and Valentown Road. 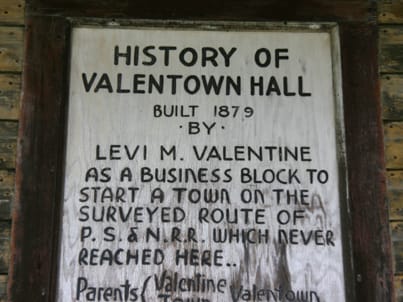