The Haunting of the Landmark Inn

The Landmark Inn was constructed in 1917 and it was not finished until 13 years after, in 1930. The hotel finally opened to the general public on the 8th of January 1930. It ran as a full service hotel with 100 rooms until the 1970s, when it started falling apart. The hotel finally closed in 1982.
It was not until 13 years after when someone else bought the hotel and restored it from top to bottom. The hotel reopened its doors in 1997. Throughout its colourful history, various prominent people have stayed in the hotel, including celebrities, athletes and even government officials. Some of the notable guests are the poet Maya Aneglou, the comedian Bill Cosby, the President of Latvia Guntis Ulmanis, the governor of Michigan John Engler and Abbott and Costello.
Just like most old buildings all over the world, The Landmark Inn has its share of ghost stories and apparitions. This is one of the many reasons that make it a favourite for ghost hunters. The Librarian is arguably the hotel’s most popular ghost. It is said that during the 1930’s, when the hotel was still named the Northland Hotel, a spinster librarian and a crewman fell in love and have made Marquette their home. The crewman was planning to marry his great love after his final cruise; however, the ship was swept away carrying the entire crew down with ship. The librarian never recovered and died shortly after of a broken heart. It is reported, she looks out from the Lilac room on the 6th floor, waiting for her lover to return.
Since the hotel’s renovation and reopening in 1997, the Lilac room has remained the hotel’s most haunted room. The room’s first guest was a man who complained of the sheets having screws in it. The front desk apologized and housekeeping was told to change the sheets. Upon returning from dinner, he found that the sheets still had screws and asked to be moved to another room. The front desk have also reported getting calls from the Lilac room, even when there is no one staying there.

The Haunting of the Landmark Inn PHOTOS

The Landmark Inn does not have special tours our haunted event packages. If you are interested in learning more about the haunted guests or ghosts that reside at the hotel please call or visit their website to make a reservation. What better way to get in touch with them than to spend a few nights in the same room... 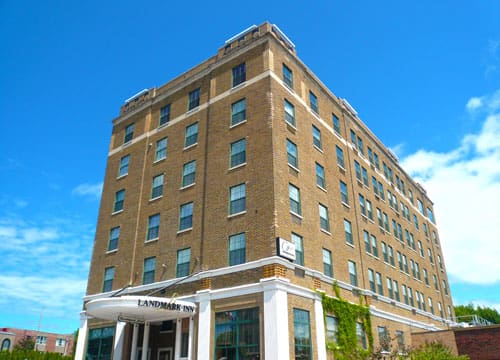