DESCRIPTION
Built in 1826, by a wealthy millionaire, It has served as a tavern, stagecoach stop, and a private residence and is now one of Waterbury Vermont's most well-known historic Inn. In 1890, the Old Stagecoach Inn underwent its first character structural transformation "from New England Federal to Victorian, an aspect that was meticulously restored in 1987 as an example of country elegance," which can be seen in great detail in its elegant parlor or in the cozy library bar.
The Old Stagecoach Inn has three floors. In the downstairs area, there is a large parlor with original antiques, and the rooms throughout the inn also have era antique sofas, easy chairs, organ, tapestries, and oriental carpets. The second and third floors, where the guest rooms are, there are 8 uniquely different rooms, and 3 more modern suites with TV, Cable, eat-in kitchen alcove and private bath.
HISTORY OF MANIFESTATIONS
During the 1920s- '40s, the Old Stagecoach Inn was the private residence of a wealthy socialite, Margaret Spencer. In 1947, Margaret died at the age of 98, in her beloved home, in her own bedroom, which is now room 2.
As Margaret Spencer loved her home so much, she didn't go on to the other side, but instead decided to hang around her old bedroom, room 2, appearing to startled guests, wearing a white shawl.
STILL HAUNTED?
Yes indeed.
Margaret Spencer has no plans in leaving and the living has made no effort to make her do so. She seems to be willing to share her room with the living, though the living may be a little unsure about sharing a room with an unseen/seen presence. 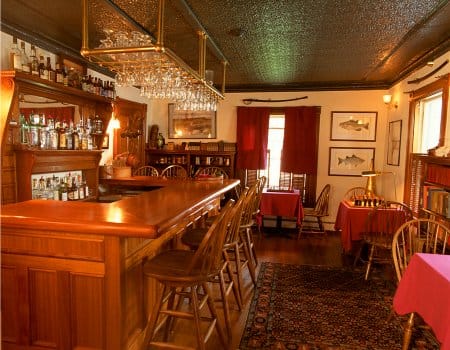