The Mason House Inn was originally built in 1846 and was previously called the Ashland House. Its owner was William Robinson. The purpose of Ashland House was to serve the steamboat travellers who were sailing from St. Louis to Fort Des Moines. In 1857, the Ashland House was bought by Lewis Mason and his wife, Nancy. They renamed it the Phoenix Hotel, however, the people who lived in the surrounding area called it Mason’s House and the name has stuck with it throughout the years. Lewis’ wife Nancy started the tradition of “a cookie jar in a room” and until now that tradition has been kept.
The Mason House has withstood 5 major floods throughout the years and it still stands to this day. The house was used as a hospital during the Civil War. In 1913, it was used as a sanitarium for tuberculosis patients. From 1920 to 1950, the house became a boarding house ran by Lewis Mason’s granddaughter. The house was sold to Herbert and Burretta Redhead and they turned it into a museum and bed and breakfast and listed it on the National Register of Historic Places. They ran the business for 33 years. In 1989, Bill and Sheral McDermott purchased the inn and did extensive refurbishing. The current owners, Joy and Chuck Hanson, bought the inn in 2001.
Three of the inn’s previous owners have died in the hotel, as well as a guest who was thought to have been murdered. Joy and Chuck Hanson, the inn’s current owners say that they have at least 5 spirits who have made the inn their home.
Several guests have reported seeing a foggy apparition of a boy on the landing who constantly plays tricks on people. There is also the ghost of a lady in a white night gown and an old man who likes to stare at people and then suddenly vanish into thin air. There is a room in the inn which has a bed that gets messed up when no-one has stayed there.
A guest in Room 5, who was a Minister, once said that his pajama shirt was tugged on while he lay sleeping. He thought that it was his wife tugging on his short wanting him to switch over to the other side of the bed. But then he remembered that his wife did not come with him on his trip. He could see his sleeve being tugged on but there was no one there. The tugging continued for several seconds and then it suddenly stopped. Needless to say, the Minister was struggled to get back to sleep after that.

Christopher Moon, a Professional Ghost Hunter from Colorado, will hold classes here at the Mason House Inn. For all you ghost hunting enthusiasts, this is an excellent opportunity to learn from an expert and explore a real haunted hotel. The "Today Show" has named us as one of the most haunted places in America. Now, we are not promising that you will see a ghost or anything like that, but this is likely to be a very interesting evening.
The Ultimate Ghost Hunting Adventure
The Mason House Inn
Bentonsport, Iowa
August 2 and 3, 2014
Call 1-800-592-3133 for event tickets and overnight rooms today! AND check our website OR call for more information TODAY!! 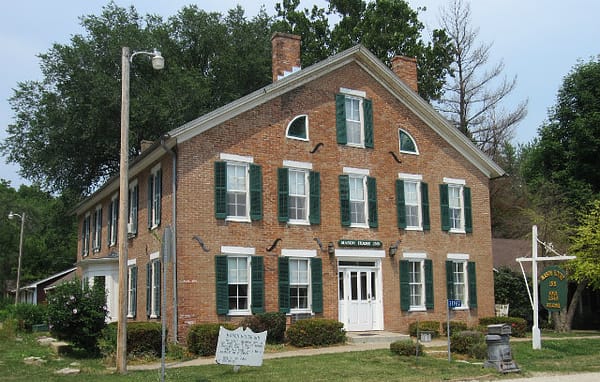