The Historic Adams House was built in 1892 by Deadwood pioneers Harris and Anna Franklin. Local contemporary press described the home as "the grandest house west of the Mississippi". The elegant Queen Anne-style house heralded a wealthy and socially prominent new age for Deadwood, a former rough and tumble gold mining town.
Make sure you also stop at the Adams Museum, the oldest history museum in the Black Hills and ranks #3 among True West magazine's 2009 Top 10 Western Museums. Artifacts and displays from Deadwood's historic past reflect the powerful legends of infamous characters like Wild Bill and Calamity Jane. See Potato Creek Johnny famous gold nugget, along with many other original artifacts from Deadwood's colorful history.
HISTORY OF MANIFESTATIONS:
W.E. Adams loved this grand, elegant mansion which he bought in 1920 at the age of 66, from his old political rival, Nathan Franklin. This very elegant home was a reward for his lifetime of achievement, which he was able to share with his wife, Alice, for five years before she died. This is also the home where he made a new marital life with his second wife, Mary, for 7 years.
MANIFESTATIONS:
Soon after W.E. Adams died of a stroke in the mansion, it is said that Mary heard his spirit walking around the second floor. Out of respect for her dead husband, Mary closed up the house, leaving everything as it was during their life together. Mary came back once a year to visit her mother, and entertain old friends in their home, but always stayed at The Franklin Hotel. So, most of the time, The Adams House was empty for 50 years, but still had all of the original furnishings! It got around town that this house was haunted by W.E. Adams, and no one dared to enter, or participate in any kind of vandalism.
We talked to some of the staff at The Adams House Museum about their paranormal experiences.
This entity likes to make his presence known in front of new staffers, in subtle or more dynamic ways, perhaps his playful way of saying hello, and welcome! (Gilcrease House)
* On her first day of the job, one staffer was surprised to smell the strong aroma of cigar smoke as she walked through the second floor.
* Another very affable, knowledgeable, newly hired male tour guide was taking a small group through the mansion. When he got to the second floor bedrooms, a rocking chair in Mary's Room, began to strongly rock all by itself. The visitors looked in amazement as did the tour guide, who finally broke the spell by continuing on to the next room, in his professional manner, not letting this manifestation fluster him and disrupt his tour presentation.
STILL HAUNTED?
Yes indeed, please be sure to see for yourself at the tours. 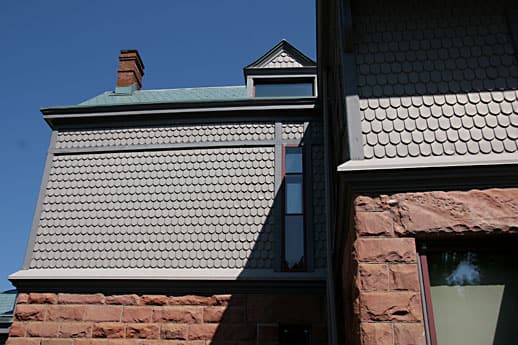