Many people throughout history claim that there are numerous signs of paranormal activity at the haunted prison. Hundreds have true haunting tales and experiences. The true haunting stories of the haunted prison date back to the 1940s when both guards and individuals confined in the facility claim that they have experienced unexplained visions and a wide array of unusual experiences. When Eastern State Penitentiary was officially abandoned in the year of 1971, the true haunting stories and rumors of the unexplained haunted prison seemed to increase dramatically. Given the amount of isolation that the souls confined to the structure endured as well as the fact that they had to wear black hoods to cover their faces when moved from one location to another, it is not at all surprising that the structure is considered to be one of the most haunted places in America.
One of the most popular ghost stories associated with Eastern State Pennitentiarythis haunted prison includes the catwalk section of the facility. On the popular “Ghost Hunters” TV show, a shadow figure was caught on video in this region. Many visitors to the haunted prison have reported many different signs of paranormal activity in this location. Not only have visitors felt extreme temperature fluctuations, but they have also witnessed shadowy figures and captured amazing EVPs on the catwalk. One guest reports capturing an EVP where a male voice stated: “I’m lonely”. If you are interested in visiting one of the most haunted places in America, the catwalk at Eastern State Penitentiary seems to be a location where you are sure to capture a glimpse or a voice of a paranormal entity.
There is a very intriguing true haunting story surrounding Al Capone when he was confined at the haunted prison. He insisted that he was being tortured by a man named James Clark, who was killed in the event known as the “St. Valentine’s Day Massacre”. Each night, it was said that Capone would scream in fright. He was reported in screaming at a man who he referred to as “Jimmy”. He would beg and plead for the man to go away and leave him alone. Yet, night after night, the spirit of James Clark would evidently return to torture Capone for the rival against his brother-in-law. Despite the fact that the guards consistently checked in and around Al Capone’s cell, they were never able to identify anyone or anything – despite the claims that Al presented. However, Al Capone seemed to hold a high level of intelligence and he was apparently shook up by the signs of paranormal activity that plagued him.
Many individuals that have worked in or explored the area known as “Cellblock 12” – which was a restricted location within the facility – have claimed that they have experienced true haunting events in the area. Other blocks such as “4” and “6” have also been associated with signs of paranormal activity. Eastern State PennitentiaryMany individuals claim that they have seen shadowy figures moving in and out of the areas. Others have expounded on the fact that they have heard whispers, screams, and laughter in these locations. In addition to these occurrences, many claim that as they walked through the facility, they experienced the sensation that they were being watched by an unidentified entity. One of the most popular true haunting stories of the haunted prison involved a man by the name of Gary Johnson. He was a locksmith who was performing restoration work to the facility. He felt uneasy and turned around to see a black shadow jump from one cell into another.
If you have an interest in visiting one of the most haunted places in America, the haunted prison known as Eastern State Penitentiary is sure to pique your interest. There are many ghost tours and related events hosted at the facility. It is important to understand that the signs of paranormal activity may not be appropriate for the faint of heart. However, if you are truly interested in the paranormal, this is one of the most interesting and promising haunted places to go. 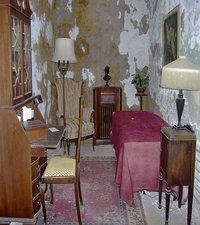 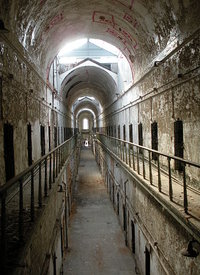 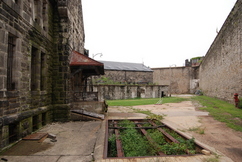