HISTORY/DESCRIPTION
It is a two story building, with stairs leading down to the bathrooms and storage area. Memorabilia of Presidents of the United States can be found all around the place. Food entrees range from 10 to 12 dollars, described as American food, with an emphasis on salads. Popular with people traveling and the local people.
While this current pub and restaurant moved into the building in 1997, the buildings which house this pub and restaurant are 200 years old, which dates them back to 1806. These buildings were originally private homes which over the years became connected to create one building. The basement of this building at one time was the family chapel. A large carving of Jesus was found here and is stored safely in the basement storage room, among the bottles of liquid refreshment and other items.
Over the years other taverns and businesses have set up shop in this building. No major renovations to the place have taken place, to stir up entities from an earlier time, no major traumatic events happened in the building or outside in the area surrounding the building and no reports of hauntings in town folk-lore have been made, until the incident which happened in the late 1960s, so the story goes.
HISTORY OF MANIFESTATION
The presence which now haunts the building is thought to be from the recent past. In the 1960s, another bar was operating here. A patron, "Lemonade" Mullery, who would be characterized as the tavern's character, had a lusty appetite for alcohol and a love for practical jokes and throwing things at the staff in a spirit of fun; (1950s style), which would get anyone else removed from the establishment. But, for some reason, "Lemonade" Mullery's behavior was tolerated as he was a beloved part of the place and people had high regard for him. Go figure!
After getting absolutely plastered from a long drinking binge in the bar, he managed to negotiate the stairs to the bathroom, but met his end when he slipped in some urine which missed going into the urinal and broke his neck.
MANIFESTATIONS:
It is not clear if any other pubs were operating here between the 1960s tavern and The Dead President's Pub and Restaurant, which opened in 1997, but the staff and patrons of the Dead president's Pub and Restaurant have experienced paranormal activity from an entity who doesn't have both oars in the water. He is most active after the pub and restaurant has closed, and the staff is shutting down the place for the night.
A presence is easily felt in the pub and restaurant, even by those with little psychic ability.
The waiters and waitresses have had dishes thrown at them, and heard stifled maniac giggling behind them.
Glasses in the bar have rattled by themselves. Other poltergeist incidents occur, and pranks have been played on patrons.
Dominoes in the game room have been known to float across the recreation room.
Giggling is heard on the stairs and the area around the bathrooms.
STILL HAUNTED?
Yes indeed!
This entity may very well be "Lemonade" Mullery, or it could be another spirit. Whoever it is, its antics are tolerated and accepted as part of the experience of being in a haunted building, and /or working on staff there. 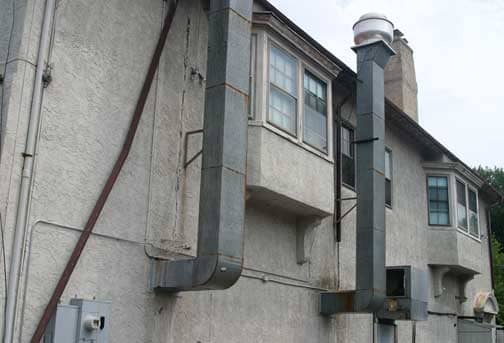