The first music hall which stood here was a modest festival hall, called Gesang Hall. The showpiece theatre which stands here now was built here in 1878, with private money raised by the heavily German population. It has the distinction of being the first in America to be built by a combination of private money fundraiser and a matching grant of money from a Mr. Springer, a wealthy German member of the community. The result was one of the world's most beautiful music/arts/community halls.
Unlike other grand buildings in other cities, this building was kept in good shape throughout the years with periodic renovations and building expansions to meet the rising need of the people in the community.
The music hall was built on the spot where an insane asylum for the mentally ill, Commerce Lunatic Hospital and a hospital for the diseased, called by the locals, The Pest House once existed. Hundreds of people who died in the insane asylum and the Pest House, were buried in mass graves in a pauper's cemetery, which never got moved to another cemetery when the first music hall was built right on top of it, which is a really bad idea! What were they thinking?? Yikes!! Every time there were renovations and building expansions made, more bones were disturbed and are unearthed.
MANIFESTATIONS:
Day and night, maintenance workers, volunteers, audience and group members and security guards are treated to paranormal occurrences.
• Angry whispering from an unseen presence in the elevator.
• The real sense of being followed and watched by an unseen presences and shadowy figures.
• Been entertained by a lovely female voice in the building when no one living was there.
• Following the sound of laughter, workers followed the sound and found that in the Music Hall Ballroom, there were apparitions of men and women dancing around the room in formal 1800s dress.
• During Performances, full-formed entities of men and women dressed in their finery of decades ago, have been known to join the living for the night's performance in the Music Hall.

STILL HAUNTED?
Yes indeed!
The Cincinnati Music Hall is enjoyed by the living and the departed. If one's grave is under such a grand building, why not enjoy it as well if you can't rest in peace? Besides enjoying the arts, an entity can get its chuckles by following the living around, venting frustrations by whispering at the living, and even try out the acoustics in the hall by singing. - ADDRESS:
1241 Elm Street
Cincinnati, Ohio 45210
(513) 744-3344 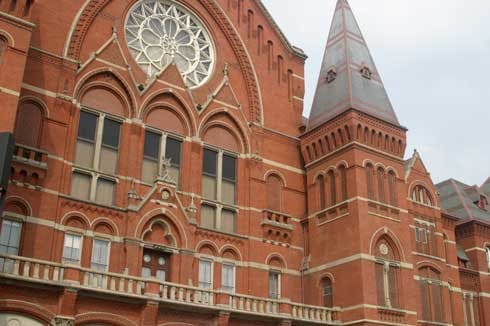