HISTORY:
To escape the heat of LA in the summer, this "summer home," Belmont, which is an Italianate-style, 36 room, 19,000 sq. ft. villa, was created to be a work of art to be enjoyed by the family and others. It was surrounded by lovely, well-landscaped gardens. Besides the huge mansion and glorious gardens, This estate included an "art gallery, conservatories, aviary, lake and zoo."
Adelicia and Joseph had generous hearts. Because there was no park in Nashville, Adelicia and Joseph opened up the gardens and the estate to the people of Nashville. They also loved to entertain, and held wonderful parties and events at Belmont.
After her second husband was killed in the war, she saw the writing on the wall and took the initiative to secretly negotiate a deal with both sides to allow her cotton shipment to be sold in England for $960,000, a nice nest egg to see her and her 4 children through reconstruction. She took her children to Europe after the end of the Civil War, where she continued to collect art and bought 5 sculptures from renown American artists working in Rome.
On the mansion's grounds Adelicia started a college for women. Sometime after she got married again, she sold her Belmont villa, under the condition that the school would continue on the property. When she died, she left an endowment to support the college. The women's college carried on from 1880 - 1913, when it grew bigger from 1913-1951. In 1951, the Tennessee Baptist Convention started the second version of Belmont college which was a co-ed college with high educational goals. In 1991, the college became a university, growing to 2,800 students, becoming "a premier teaching university, bringing together the best of liberal arts and professional education in a consistently caring Christian environment."
The mansion itself is now a historical museum, and its grounds are part of Belmont University Campus, which is a fast growing university. By 2006, Belmont University has doubled its size and expanded in many ways. Offers more than 70 undergraduate and graduate academic programs through its seven colleges and schools.
HISTORY OF MANIFESTATIONS:
Adelicia Hayes Franklin Acklen Cheatham may have been wealthy and lived a life enjoying doing productive activities, giving to others and experiencing the finer things of life, but she had to endure a lot of personal losses in her lifetime, yet carried on bravely.
Adelicia was born into a wealthy, Nashville family in 1817. As a young woman, her teen-aged fiancee died before he could marry her. Her first marriage was to a wealthy, older man, Isaac Franklin, with whom she had four children, who all died before they were 12. Isaac died after only 7 years into their marriage. Adelicia was no wilting flower, but a courageous person, with savvy business sense. Adelicia went forth with life with vigor and continued to run her 8,400 acre Louisiana cotton plantation.
In 1849, Adelicia fell in love and married a young lawyer, Joseph Acklen. After building, furnishing and landscaping their dream villa, Belmont and its grand estate, Adelicia and Joseph settled down and had 6 children. Tragedy struck again when her twin daughters died of scarlet fever. The Civil War came to Louisiana, and her second husband was killed.
In 1887, she sold her beloved Belmont and moved to Washington D.C. to live. She died later that same year. She is buried in Nashville.
Adelicia in her lifetime, lost a fiancee, 2 husbands and of course 6 children, which was the hardest, most painful loss to endure.
She also sold her most beloved summer home, Belmont with the plan that her college would continue, being financed by her endowment. She died in D.C. but came home to Nashville to be buried.
MANIFESTATIONS:
Adelicia can't quite rest in peace, and has set off motion detectors in Belmont and its buildings at night.
She feels the urge to supervise the living, and keep watch concerning her Belmont.
The full apparition of Adelicia, attired in a 1800s style, ante-bellum gown, has been seen by the security guards, students and museum staff floating around many parts of the villa, going about her business, checking up on the living, making sure things are in place and are being taken care of properly.
The living have come face to face with the entity of Adelicia.
It was reported that a woman was walking down a hallway one evening during an event, and who should she see face to face but the apparition of Adelicia, dressed in a elegant evening gown. YIKES!
It was reported that Adelicia appeared as a full, solid form and told a museum guide that the furniture in one of the bedrooms were not arranged correctly!
PSYCHIC RESEARCH:
A Psychic came in to investigate and reported:
She is still hurting from the loss of so many children. Adelicia is missing her children, and is looking for the ones who had died so long ago.
Adelicia was worried that Belmont would be torn down soon because the present Belmont University is growing so fast, and the buildings are being renovated and new ones are being built.
STILL HAUNTED?
Yes indeed!
Despite the high standards taken by responsible people to be sure to not make or leave a mess on any property near the mansion, keep Belmont in terrific condition, carefully preserving and maintaining the art and antiques, and using the Grand Salon for events which she would approve of, Adelicia has made herself a member on the staff, a harmless entity supervising in her own way.
Losing children is an awful, painful, stressful experience for any parent. Adelicia lost so many, due to illnesses which are now taken care of by medicine and vaccines. Perhaps she didn't fully go through the mourning process because she had to be strong and carry on for others. She now can't rest, despite the fact that they are all on the other side waiting for her.

Tours are available by the mansion staff for individuals & groups. No matter how big the group is when they come to visit, there are only 15 people to each tour guide. Touring Hours Monday - Saturday 10:00am-4:00pm ///Sunday 1:00pm-4:00pm
In their Victorian, classy Grand Salon Room - Catering for Special Events at a reasonable cost.
Dinner at Belmont....The Belmont Mansion offers for groups (25-85) an elegant evening which includes a delicious dinner, a personally guided tour, and fabulous live entertainment during coffee and dessert, for only $35 to $45 per person.
Progressive Lunch & Dinner Tours - Begin with lunch and a tour at the Belmont Mansion, move onto afternoon refreshments and a tour at Travelers Rest, ending with dinner and a tour at the the Belle Meade Plantation. 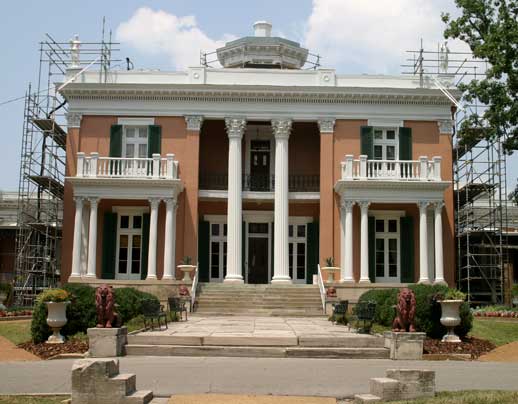 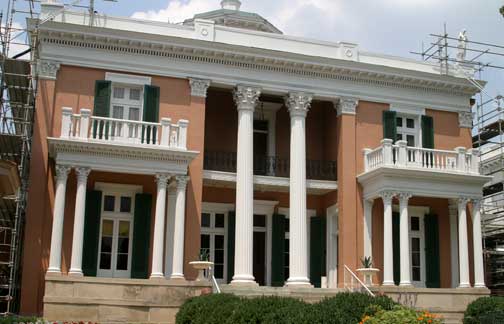 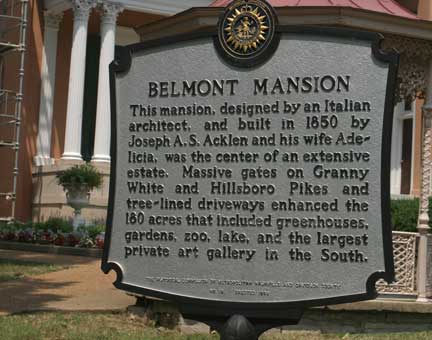