The mansion's name, Anchuca, was a Choctaw word meaning "Happy Home." It is described as being a "palatial town home," built to meet the high living standard of the wealthy merchant who lived in Vicksburg during the 19th century.
It is a lovely 2 story mansion, with all of its original architecture, being a beautiful mix of Primitive Colonial Style, Greek Revival and Gothic influences. It featured wooden gallery floor, which was replaced in the 1950s. The original front door, which was destroyed during the battle of Vicksburg, matched the second floor door which opened up to the balcony above. It was a single door 'with sidelight and a transom above."
The Entry Hall and the Ladies Parlor both have the original ceiling medallion with its acanthus leaf pattern, made of marble dust, horse hair, and molasses. The door leading to the balcony features the original stained glass side lights and transom which surrounds the door. These were imported from Europe, and made in a process using pure gold and mercury.
Be sure to check out the 1780ish chandelier in the Gentleman's Parlor, made of Sevres porcelain and gilded bronze.
While none of the original furnishings remain, Anchuca today is "handsomely furnished with fine antiques and art representing the late 1700s to the mid-1800s." The antique furniture found in the home gives the guest/visitor an idea of what it must have looked like in the mansion's earlier years.
HISTORY:
Many people have enjoyed this lovely town home, each adding a little to the mansion's history and look.
The original home was built in 1830 by a local politician, J. W. Mauldin, in the Primitive Colonial Style. The mansion faces North rather than west toward the river. At the time it was first built, the Mississippi River ran where the Yazoo canal is now. The whole area between Spring Hill and Fort Hill in the Military Park was flooded, creating the original Port of Vicksburg.
In 1837, another family moved in and improved the mansion, making room for the large family of Richard Archer, a plantation owner described as being eccentric and stubborn, who wanted to move his family into town. He had five daughters who he strictly brought up, keeping a tight leash on them.
In 1847, the mansion became the home of coal and ice merchant, Victor Wilson, who added the Greek Revival front addition that is seen today. Mr. Wilson liked to watch his own barges float coal and ice down the Mississippi to markets in the South.
The next owner was Joseph Emory Davis, the wealthy owner of Hurricane plantation and brother of Jefferson Davis, the President of the Confederate States of America. It is from this balcony that Jefferson Davis conceded defeat to the Union forces in a speech to the townspeople.
HISTORY OF MANIFESTATIONS:
Out of Richard Archer's daughters, one was a carbon copy of not only his looks but also of his temperament. This headstrong lass, her father's favorite daughter, was called "Archie." She unfortunately fell in love with the overseer's son on her father's plantation. Richard Archer rejected this match, forbade their love and sent the young man away, seriously ruining his relationship with Archie. She wouldn't talk to him and ate by herself standing by the fireplace in the Ladies' Parlor and perhaps by the main Dining Room fireplace as well.
During the Civil War, during the Siege of Vicksburg in 1863, Anchuca Mansion was used as a hospital, as many private homes were called into service out of necessity.
MANIFESTATIONS:
The entity of the young woman, "Archie" Archer, dressed in a long brown dress has been seen since 1966, standing in either the Parlor or the Dining Room, close to the fire place.
She started appearing in 1966, when the Jack Lavendar, his wife and his daughter, Mel moved into Anchuca Historic Mansion. The Lavendar family and their butler had all seen her, as well as others throughout the years.
Her presence has been strongly felt on occasion in these rooms.
In the slave quarter, a strong presence is sometimes felt there by guests as well.
It seems that some entity left from the hospital days is still hanging around.
There are reports of unexplained activity, attributed to a soldier who had died here.
STILL HAUNTED?
Yes indeed.
It seems the Anchuca Historic Mansion is still home to several entities with issues which keep them from going to the other side.
It is interesting that the entity of Archie didn't start appearing until another teenage daughter moved in with her family, though this entity has been hanging around for years. Perhaps she died before she could make up with her father? Perhaps she is still waiting for the boy she loved to come and get her? Anyway, this entity is trapped in the home; angry and heart broken, not able to let go enough to go to the other side.

The Anchuca Historic Mansion is now a lovely Bed and Breakfast, which also serves meals to the public. Lunch is served Thurs.& Friday, 11-2 p.m. Saturday Brunch: 10-1:30 p.m. Supper: Thurs. Saturday: 6 p.m. 8 p.m.
Tours are offered daily from 9:30-3:00, only 6 dollars a person. - The historic Anchuca Mansion can be found in one of the oldest neighborhoods of Vicksburg, called Spring Hill, a well-to-do area where many of the wealthy lived.
Traveling east on I-20, take exit 1A, (Washington Street). Go north 2.6 miles to South Street, turn right, proceed three blocks to Cherry Street, turn left, pass the Old Court House Museum, turn right on First East Street. Anchuca is immediately on the right, on the corner of Cherry Street and First East Street. 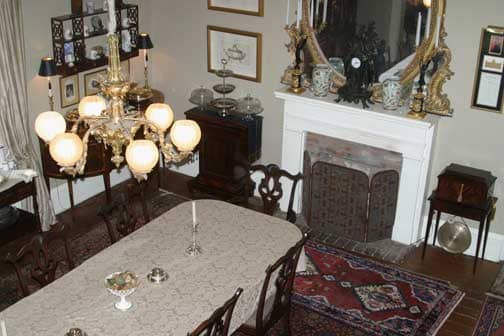 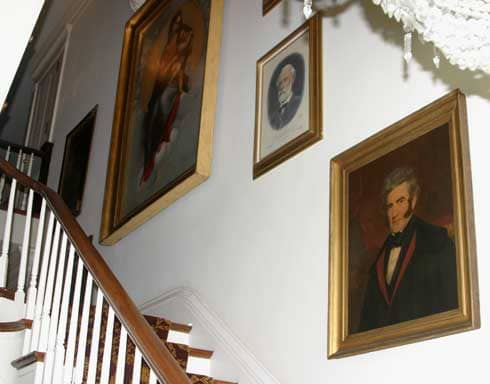 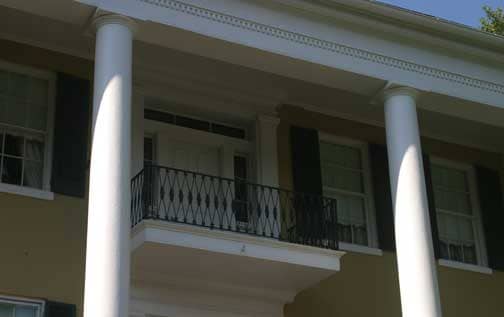 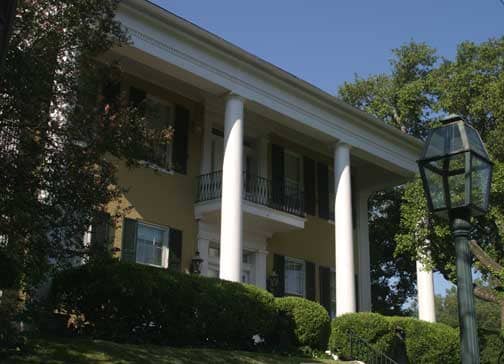 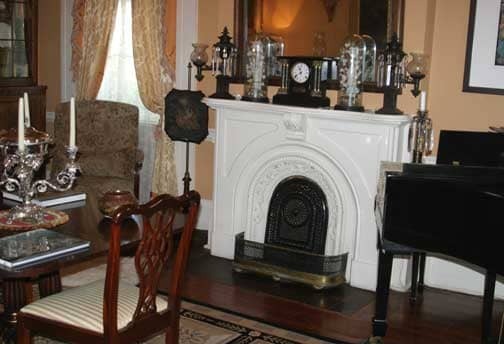 Chapel of the Cross