The Algonquin Hotel is a New York City Landmark. The hotel was designed by Goldwin Starrett and it opened in 1902. The hotel was planned as a residential hotel but was changed into a lodging establishment. Frank Case took over the hotel in 1907 and bought the property for $1 million. Frank Case was the owner and manager of the hotel until in 1946. Upon Frank Case’s death, the hotel was purchased by Ben Bodne. The hotel changed hands several times and in 2002, it ended up in the hands of Miller Global Properties. After a costly renovation, the hotel was sold to HEI Hospitality which owns the hotel presently.
When the hotel opened in 1902, it had 174 rooms. The hotel is best known for housing some of the best literary and theatrical minds. The most prominent of these geniuses was called the Algonquin Round Table. Frank Case, the hotel’s original owner established some of the hotel’s traditions. One of these traditions is to keep a cat. Male cats are named Hamlet and female cats are named Matilda.
A hotel which exudes sophistication and elegance for over a century, the Algonquin Hotel also has its share of ghost stories. The members of the Round Table who were primarily critics and writers is still said to make their presence felt in the hotel. Some employees and guests have reported seeing members of the Round Table walking in the bar, lobby and the dining room.
One guest experienced two haunting incidents in the hotel. The guest was billeted on the ninth floor and he was awakened by a tapping sound from the bathroom. It was the like the sound of razor tapped on the side of a porcelain sink. The guest turned on the light and saw a completely empty bathroom.
The next incident occurred when the guest just came back from a cruise the following night. He took the elevator to his room on the ninth floor at almost 2 am. While he was walking to his room he heard footsteps coming up the stairwell. The sound got closer and closer but when he looked, there was no on one on the stairs.

The Algonquin Hotel does not have special tours our haunted event packages. If you are interested in learning more about the haunted guests or ghosts that reside at the hotel please call or visit their website to make a reservation. What better way to get in touch with them than to spend a few nights in the same room... - From Connecticut/New England
1-95 South to the Bruckner Expressway (Interstate 278 West)
Follow sign for Triboro Bridge. Stay to the right
Look for Manhattan/FDR Drive South/Randalls Island/Downing Stadium sign
Merge onto the Triboro Bridge
Take FDR South to Midtown Manhattan
Exit at #11 and merge onto East 53rd Street
Turn left onto Second Avenue
Turn right on East 42nd Street
Turn right onto Sixth Avenue/Avenue of the Americas
Turn right onto West 44th Street 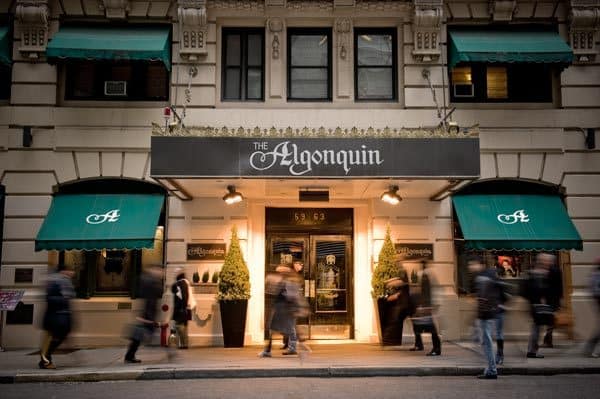